Pitch Perfect 2 is expected to debut at number 1 this weekend! Experts predict it could gross more than $50M. 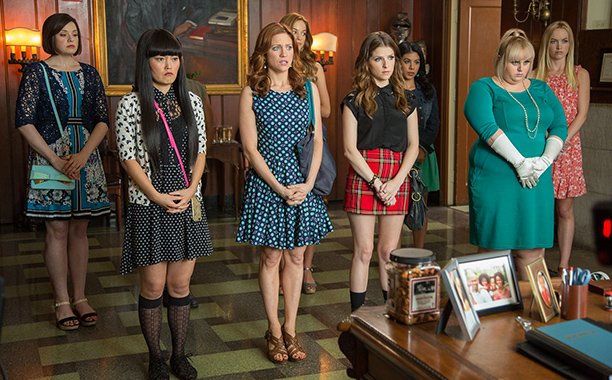 It’s going to be a big weekend at the box office as the girls of Pitch Perfect 2 face off against the R-rated, testosterone-charged mega-budgeted Mad Max: Fury Road. Although both bow Thursday at 7 PM, right now it appears the girls have a leg up at the domestic box office. Industry observers think PP2 will win the three-day weekend and could gross more than $50M while Mad Max from Warner Bros (in 3D) will end up a step behind in the low-$40Ms. Mad Maxreleases day-and-date internationally and overseas will receive a nice promo at theCannes International Film Festival from its stars Tom Hardy and Charlize Theron.

Meanwhile, PP2 will debut day-and-date in 27 international territories including the U.K., Germany, Russia and the Philippines. The film opened over the weekend in Australia and New Zealand. It opened 300% higher of the opening of the originalPitch Perfect in those markets.

PP2 is directed by a female director — Elizabeth Banks — who is making her feature-film helming debut. Banks produced and starred in the first film and again serves both roles in Pitch Perfect 2.
The first film opened in limited release before going wide in September of 2012. It ended up with a $113M worldwide box office gross, with 57% of it (or $65M) coming from domestic audiences.

In terms of demographic makeup, PP2 is (obviously) is skewing female and right now has the lock on older females. In addition, younger females have a higher interest than Mad Max‘s older male demo.

Whether the female ensemble movie will have legs remains to be seen. It’s 72% fresh with its core audience, but it has a 98% want-to-see. That’s good news for distributor Universal as female audiences tend to commit more. Sorry, guys, just the facts.

Universal is releasing PP2, and if there is one area in which studio is adept where others fail, it’s successfully marketing and distributing sequels. Compared with the mega-budgeted Mad Max, the PP2 is a moderately budgeted film and, yet, is expected to win the weekend. Seems like the budgets for the two films should be inverted.