Will Anna Camp be returning for Pitch Perfect 2? 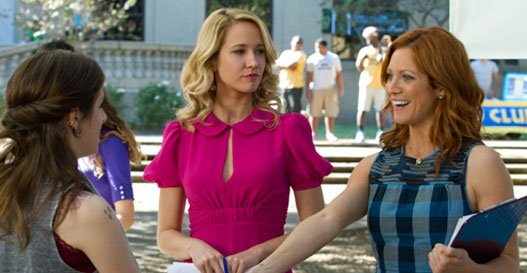 Ever since Pitch Perfect 2 was announced many fans have been wondering if the entire cast from Pitch Perfect was coming back for the sequel.

Production have already started this week in Baton Rouge and we can see that most of the original cast is back. However there is one noticeable absence: Anna Camp is not there.

Anna Camp’s character Aubrey was one of the main characters of Pitch Perfect and fans like me really want her to be back for the sequel. It’s been told that her character has already graduated by the time Pitch Perfect 2 takes place but that doesn’t mean she can’t be back, right?

Anyhow, I’ve been searching the web for some clues if she is returning and have found almost nothing.

Here is something I found, it’s from an interview with Elizabeth Banks from Bustle.com back in February. It is mention that they would love to have Anna Camp’s Aubrey back. Now this text is not an exact quote from what Elizabeth Banks said, it is rephrase by the person writing the article. However this is still hopeful, I guess.

Though Anna Camp’s character, former Bella leader Aubrey, will have graduated by the time that Pitch Perfect 2 happens, we’d love for her to make an appearance in order to school the newest Bellas. While she may have not been the most, umm, “progressive” leader that the Bellas saw, she definitely knew how to keep those ladies in line. Source: Bustle.com

I am hoping they are keeping her involvement in Pitch Perfect 2 a secret for now and will announce her return sometime soon, like they have been doing with the original cast. They announced that Anna Kendrick and Rebel Wilson were coming back and then waited a few weeks to announced Adam DeVine’s return and just yesterday they made official the return of Skylar Astin… For that reason I am still holding hope that Anna Camp will make an appearance in Pitch Perfect 2.

Do you guys have any more information about Anna Camp’s rumored appearance in Pitch Perfect 2? We’ll keep you updated on the possible return of Anna Camp for Pitch Perfect 2, but if you find out first let us know!

So, do you think Anna Camp will return for Pitch Perfect 2? If she was, what do you think her story would be?