Secrets from the Set of Pitch Perfect 2: How Twitter Helped the Green Bay Packers Steal the Riff-Off 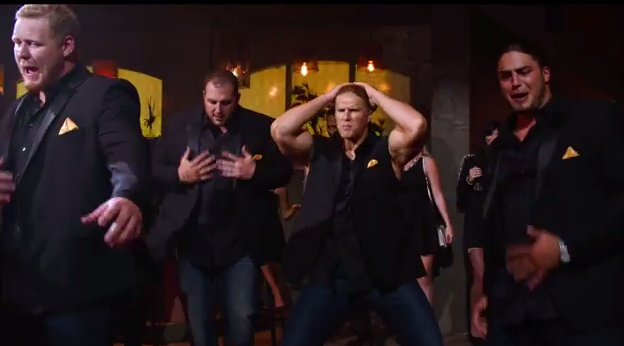 “We had heard online that there were a number of pro athletes who were big fans of Pitch Perfect,” Handelman told PEOPLE. “We came to learn that the primary fans were these Green Bay Packers.”

Offensive lineman for the Wisconsin football team, David Bakhtiari, 23, soon had a new Twitter follower – director and actress for the musical sequel, Banks.

“He subsequently direct messaged her and said, ‘We are massive fans and would love to do anything in the movie we could.’ Elizabeth said, ‘That’s really funny, you should talk to my husband who’s a huge football nerd.’ David and I started talking from there,” Handelman said.

“Originally the role was written to be a Fat Amy doppelgänger, Zaftig Anke,” says Handelman, who shared a number of set secrets with PEOPLE in advance of the sequel, which hits theaters Friday. “But we ultimately loved Flula so much and thought he was capable of doing so much more than a one-note Zaftig Anke joke that we changed the role for him.”

“To be around Flula and know Flula is kind of a unique thing,” says Handelman, who is the husband of Elizabeth Banks, one of the movie’s stars. “Flula brings this joyful and manic and crazy energy to the sets and his performance. But he’s also extremely talented. He can beatbox, he can sing, he can dance, he’s very funny, and he’s an extremely smart guy.”

Continues Handelman: “He’s part of that Pitch Perfect fabric. He’s a character you wouldn’t find in any other movie. But when you see Flula pop up in Pitch Perfect 2, you’re like, ‘Yep, that’s a Pitch Perfect 2 person!’ “