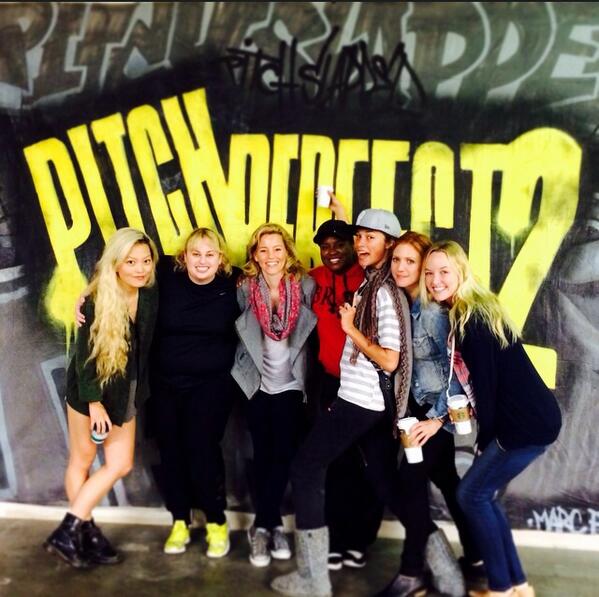 Elizabeth Banks was recently interview by Eonline and she told them a few things about the upcoming Pitch Perfect 2 movie, which is also her directorial debut.

In regards of filming Pitch Perfect 2 she says:

“It was really an amazing experience. You know, just wearing more hats…and trying to build on the foundation of the first film and trying to give fans something that they will really enjoy and just that people will generally have fun with.”

Also she was asked about the “cups” viral phenomenon:

“I’m so thrilled by every video I ever see of kids doing it,” she said of Anna Kendrick’s viral “Cups” audition. “And we get videos from all around the world. Honestly, I cry every time I see it because it’s so amazing to me that we touched so many people with that moment in the movie. And I’m thrilled for Anna and just the whole success of it was just a phenomena unto itself.”

About the success of Pitch Perfect and filming a sequel, the expectations:

“I think it was lightning in a bottle,” the Hunger Games star explained. “Our expectation is not to replicate that, we just want to make a really authentic original movie with a really fun story about characters that people already love. And if, like in the first film, something gets taken away from it, then wonderful, but we’re not setting out to do that.”

About Taylor Swift being in the movie:

“I can confirm that Taylor Swift is not in the film,” Banks revealed with a laugh before admitting she didn’t want to give any too many details.

“There are some really fun characters in this movie. One of the themes of the film is graduating and going out in to the big bad world, so we definitely brought in some grown-ups that the girls would encounter in their adult lives, and that was a lot of fun, to sort of figure out how to talk about what it is to leave this wonderful experience of college and your friends and go out into the world into your own again…that transition in people’s lives.”

“Oh goodness, let us just get this out!” the Walk of Shame star said with a sigh of relief.