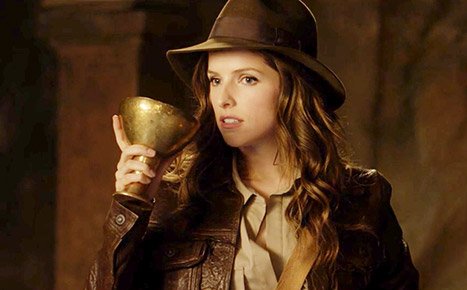 Anna Kendrick take on the role if ‘Indie Anna Jones’ in a sketch that will air during NBC’s Red Nose Day special.

The three-hour broadcast will benefit 12 charity organizations supporting youth affected by poverty in the United States and worldwide.

* The video is not available in all countries, in fact I can’t even see it 🙁

* When I find another source for the video I’ll post it!

Anna Kendrick is having a pretty rad weekend. In addition to opening up “Pitch Perfect 2,” Kendrick also made a bid to play “Indianna Jones” in a female reboot of the classic Harrison Ford movies. True, the bid was one hundred percent a joke, a digital sketch Kendrick shot for NBC for Red Nose Day, a television benefit organized by Comic Relief to raise money for children and young people living in poverty. Still, we LOVED this sketch using the upcoming all-lady “Ghostbusters” reboot to pose the question “What if there were a LOT more lady reboots of classic dude movies?”

In Kendrick’s parody, “Indianna Jones and the Last Crusade,” Kendrick plays Jones, with the hat, whip, and everything, on a mission to seize the Holy Grail. What stands in her way? A knight (played by the very hilarious Brett Gilman) who is VERY behind the times and proceeds to both objectify and mansplain her. Kendrick’s Jones is having none of it, she shoots down every one of his backwards remarks and makes off with the Holy Grail (and a few more relics, she IS an archeologist, after all).

Anna Kendrick reboots the Spielberg classic with her own take on the legendary archeologist. Watch Red Nose Day May 21 on NBC starting at 8/7c.