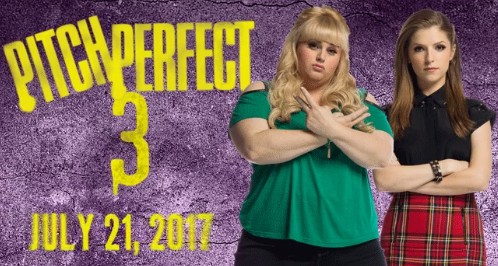 Anna Kendrick and Rebel Wilson will be definitly be back for Pitch Perfect 3. Screenwriter Kay Cannon is in talks to write the script. Still no word if Elizabeth Banks will return to direct Pitch Perfect 3 and no other news on casting have been confirmed yet.

Announcements about casting are going like for Pitch Perfect 2, first we got the confirmation of the return of Anna Kendrick and Rebel Wilson… hope this follows the same path and we get the original cast to come back for a third time!

#PitchPerfect3 confirmed by @UniversalPics ! What do you want to see in the next film?! @KayKayCannon @PitchPerfect #crushedit

With the first sequel harmonizing with nearly $260 million worldwide in just a month, Pitch Perfect 3 is coming to a megaplex near you in two years. With starsAnna Kendrick and Rebel Wilson set to return, the Universal threequel will arrive July 21, 2017.

The second film in the installment opened to $69.2M on May 15 to become the highest-grossing movie-musical opening of all time. The third one will be produced by Paul Brooks of Gold Circle Entertainment and Max Handelman & Elizabeth Banks of Brownstone Productions.

Although it’s known that the studio is tapping Kay Cannon to script, it’s not yet clear whether Banks will come back to direct this one. Banks made her feature directorial debut on Pitch Perfect 2 — and what a debut it was. In its first weekend on stage it out-performed the $65M lifetime domestic gross of the first film. PP2 also became the second-highest PG-13 comedy opening ever (only behind Austin Powers: Goldmember which opened to $73M in the summer of 2002).

PP3 is slated for release on a weekend that right now includes an untitled animation project from 20th Century Fox and Blue Sky.

Anna Kendrick and Rebel Wilson will be back for the third installment in the Pitch Perfect franchise.

Paul Brooks of Gold Circle Entertainment and Max Handelman and Elizabeth Banks of Brownstone Productions are returning to produce.

As The Hollywood Reporter exclusively reported, Kay Cannon, who wrote the first two installments,is in talks to write the third film. It’s unclear whether Banks will return to the director’s chair.

Pitch Perfect 2, directed by Banks, opened in May to strong success at the box office, taking in $259.7 million worldwide to date. The first installment in the acapella franchise earned $115.4 million worldwide. The series stars Kendrick, Wilson and Brittany Snow, and the second film added Hailee Steinfeld as an important new member of the group.

The only other film currently slated for release on July 21, 2017 is an untitled DreamWorks animation project.

Kendrick, who plays Beca (one of the leaders of the Bellas), has The Accountant with Ben Affleck,Mr. Right with Sam Rockwell and Fox Searchlight’s Table 19 coming up. She’s repped by CAA and Morris Yorn.

Wilson’s upcoming projects include spy spoof Grimsby and ensemble film How to Be Single. She’s repped by WME.