Box Office – Saturday Report – Pitch Perfect 2 on its’ way to the top opening weekend for a musical!

Pitch Perfect 2 is crushing it at the box office! It is expected to make over $60M this weekend!. If this happens it will make Pitch Perfect 2 the top opening weekend for a musical ever!

3rd UPDATE, Saturday, 12:26 AM: Staying up for this one as the numbers roll in and Universal’s sequel grosses raise. As of right now, it looks like Pitch Perfect 2 could hit $70M. Two estimates have come in showing a possibility of a 3-day weekend even over that with $70.3M and $70.5M, respectively. Regardless of whether it ends up in the high $60Ms or $70M, this bow is not only the highest 3-day opening ever for a musical, but also could be the highest opening for a directorial debut. Will be checking that stat in the AM. To say that females rocked it this weekend is an understatement. Chalk up another successful franchise property for the studio which is probably the best in town right now at marketing and distributing sequels.

2nd UPDATE, Saturday, 11:23 PM PST: Universal’s musical Pitch Perfect 2 hit the high note on Saturday and held better than anyone expected which means it is logging anywhere between $23.6M and $24.5M for a new 3-day estimate of anywhere between $66M and $68M. Some have PP2‘s gross expected in even higher once the morning comes and all the stages are accounted for.

The female-directed comedy (hear that ACLU?) is the top musical opener of all time, according to Rentrak. Well done, Elizabeth Banks, Anna Kendrick, Rebel Wilson, Hailee Steinfeld and the rest of the crew.

UPDATED, 7:10 AM, PST: Continuing to beat expectations, Pitch Perfect 2’sFriday gross came in higher than expected with close to $28M for Universal and it’s still (as predicted last night) likely to end the 3-day weekend around $62M to $64M, depending on the Saturday drop. We think it will be the lower end of the estimate.

Right now, it’s in a daily battle Down Under in Miller’s stomping ground with PP2 in its second weekend andMad Max in its first weekend.

All eyes are on the Anna Kendricks, Rebel Wilson prize-winning PP2which busted a 13-year record for the industry.

Universal Pictures now holds the number one and number two spots for the highest-grossing musical … comedy or drama. The Top Ten chart is updated below: 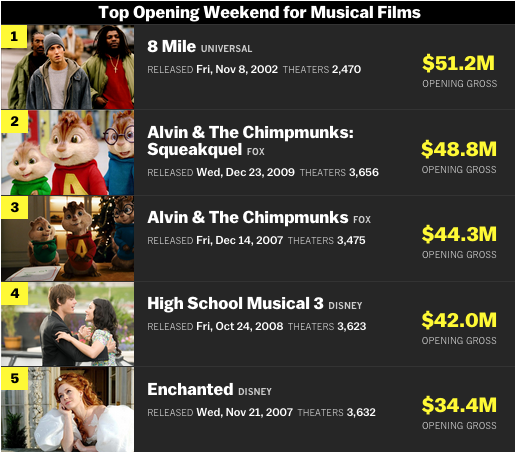 PREVIOUSLY: 11: 15 PM PST: Pitch Perfect 2 will become the highest-grossing feature musical ever at the box office with an estimated three-day weekend take of $62M to $65M, playing well beyond expectations and our predictions which had it more than $50M. The total domestic gross of the first Pitch Perfect was $65M. Universal’s comedy just trounced the competition after a tidy Friday of around $27M (which includes the strong Thursday preview of $4.6M). Saturday is key for Elizabeth Banks’ directorial debut as films with this kind of heavy female demo tends to play hardest on Fridays so it may drop a bit. (Banks produced the first film, too). PP2received an A- CinemaScore, which is more good news as that means an average multiple of 3.5. How great is Uni’s marketing and distribution department?

Saturday Update: Universal reports that Pitch Perfect 2 scored a stellar $27.8 million opening day on Friday, including Thursday’s early show grosses. That not only bests the $26 million first day take of The Fault In Our Stars last summer, but it also bests the entire opening weekends of fellow summer musicals Mamma Mia!($27.75 million) and Hairspray (2007) ($27.48 million). The first Pitch was a sleeper hit at the box office and grew its audience enormously in the post-theatrical market thanks to strong word of mouth, particularly among women. The sequel now has a chance to earn more on opening weekend than its predecessor’s entire domestic run ($65 million). Reviews, while not as strong as the first film, are solid enough at 67 percent on Rotten Tomatoes while the audience score is an encouraging 81 percent. BoxOffice projects a $69 million opening weekend.

Friday Report #2: Sources tell BoxOffice that Pitch Perfect 2 is on pace for around $50 million during its debut frame. Meanwhile, Mad Max: Fury Road should hit $45 million.

Friday Report #1: Pitch Perfect 2 got off to an excellent start on Thursday evening with $4.6 million earned from its first round of shows. That’s ahead of The Great Gatsby‘s $3.25 million Thursday start two Mays ago, as well as the $4.1 million by The Divergent Series: Insurgent back in March. For the weekend, the much anticipated sequel to 2012’s sleeper hit looks poised to earn north of $50 million.