Pitch Perfect 2 is he #1 movie in America with nearly $70M at the box office!

6th UPDATE, Monday, 1:50 PM: Pitch Perfect 2 ended the weekend with a gross higher than anyone expected with $69.2M, thanks to the female core audience which came out in force not only on Friday but also Saturday night. Both pictures also had a better Sunday, due, in part to a holiday Canada. PP2 trounced the male-dominated Mad Max: Fury Road, which took in $45M and hopes to keep some momentum going throughout the coming few weeks. The modestly-budgeted PP2, which bowed last weekend Down Under, currently has $107.5M worldwide and the mega-budgeted Mad Max opening this weekend overseas now has $109.4M worldwide (see our international report here). PP2 also became the highest musical ever comedy or drama, according to Rentrak:

5th UPDATE, Monday 7:47 AM: This morning, as expected, Pitch Perfect 2 will leave the stage with a $69M+ prize for Universal — no, by all accounts, it did notreach $70M but they sure got their national headline — while Mad Max: Fury Road drove in an extra something for Warner Bros. for $45M+. Today is Victoria Day in Canada which helped buoy attendance yesterday in North America. The Top 20 chart will come later this afternoon with final grosses.

Universal’s Pitch Perfect 2 was off to a terrific first place start this weekend with $69.22 million. The highly anticipated musical comedy sequel starring Anna Kendrick outpaced its already lofty pre-release expectations in a big way. Furthermore, Pitch Perfect 2 has already out-grossed the $65.00 million final domestic gross of 2012’s Pitch Perfect. An effective high-profile marketing campaign and the rush out of the film’s fanbase (which continued to grow after the original film was released to the home market) both helped turn Pitch Perfect 2 into an event film. Pitch Perfect 2 opened a very impressive 41 percent ahead of the $49.03 million debut of Universal’s Neighbors last May.

Pitch Perfect 2 opened with $28.01 million on Friday (which included an estimated $4.6 million from Thursday evening shows), was down 12 percent on Saturday to gross $24.75 million and declined 33.5 percent on Sunday to take in $16.46 million. That placed the film’s opening weekend to Friday ratio at 2.47 to 1. The audience breakdown for the film skewed heavily towards female moviegoers (75 percent) and towards moviegoers under the age of 25 (62 percent). The film received a promising A- rating on CinemaScore.

Following in the footsteps of Fifty Shades of Grey and Furious 7, Pitch Perfect 2 represents another strong performer thus far in 2015 for Universal. The studio looks to continue its strong start to the year in the coming months with the likes of Jurassic World, Ted 2 and Minions. 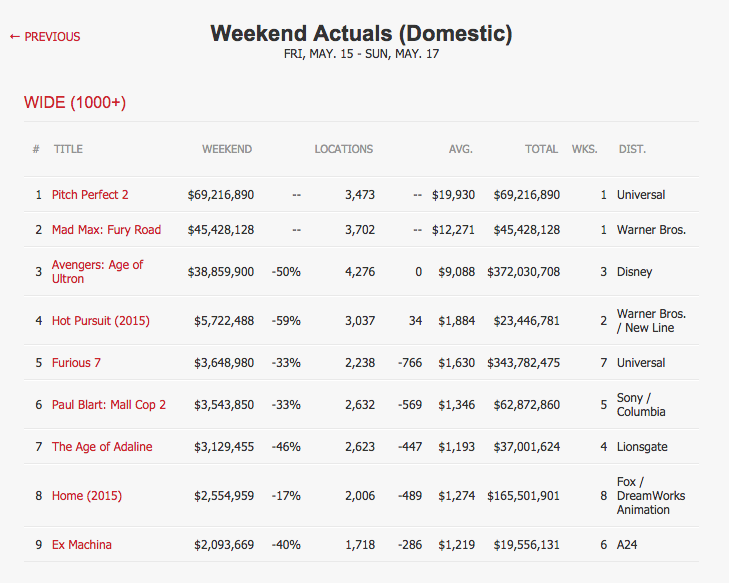