Anna Kendrick guest judge on ‘So You Think You Can Dance’ 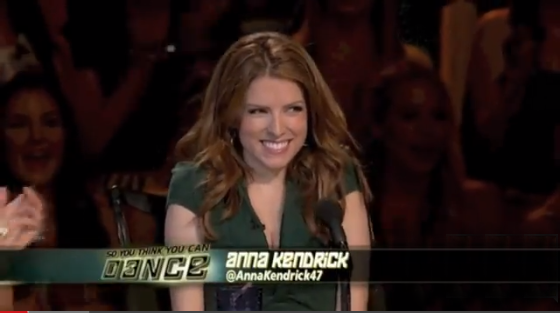 Anna Kendrick was the guest judge on last night’s episode of So You Think You Can Dance. She gave out honest and witty critiques and was charming and funny as always.

Here is a video someone posted on Youtube with just Kendrick’s appearance on the show. Listen to the introduction… is aca-awesome! Kudos to the very accomplished Pitch Perfect star Anna Kendrick…

Also The Huffington Post had an article on Anna Kendrick’s appearance as a guest judge:

‘So You Think You Can Dance’: Anna Kendrick Tells Two Dancers They ‘Should Make A Baby’

The guest judge rotation continued on “So You Think You Can Dance,” bringing Anna Kendrick to the panel this week. She quickly proved a memorable guest, with choice quotes throughout the night. But her best critique came after a salsa routine by Malece Miller and Alan Bersten.

After admitting she didn’t now much about the technical side of the routine, Kendrick still had a pretty strong reaction to the performance. “That made me want to take lessons and have an affair on a tropical island,” she said, adding after a beat, “Or maybe just the second thing.”

“You’re both such solid dancers, such deliberate dancers and, um, I feel like you guys should make a baby,” Kendrick told the stunned pair.

Entertainment Weekly’s Annie Barrett was loving Kendrick as a guest judge, claiming that Kendrick was saying everything that she was thinking. A writer for the Seattle Post-Intelligencer agreed, saying that Kendrick “killed it” at the judge’s table.

Kendrick Tweeted that she was “so excited” to join the judges, and seemed perhaps a little too eager to get out there and dance herself. Fans will get to see her footwork in the new musical, “The Last Five Years,” though it doesn’t have a release date yet.

So what do you think of Anna Kendrick’s performance as a judge?